One month in Stockholm – How I got here

Pretty much exactly one month ago, on August 22nd, I arrived in Stockholm for a one semester long Erasmus exchange within my Master studies at the Creative Sustainability programme at Aalto University.
Within this one month a lot has happened. So much in fact, that I barely found the time to blog about it, but after this start is finally made, I’ll try to add some (almost) weekly insights into my live up here in Stockholm as an exchange student at Stockholm University’s School of Business.

Let’s start with the trip to Stockholm. Luckily there’s a ferry connection linking both northern European capitals, so I didn’t need to worry too much about the weight of my luggage. I should have maybe worried a bit about the volume though. Living in the age of mobile everything like laptops and smartphones etc., meant of course that I would need to find a way to move my beloved iMac for extensive essay writing or research sessions ending up in piles of papers… The biggest problem wasn’t necessarily to figure out how to transport it–a cart was easily acquired–but more so whether or not it would fit into my future temporary home. Leaving those worries aside for a while the packaging of said computer actually turned out to be quite helpful in storing clothes. Even though I packed surprisingly light with regard to clothes (for my standards) there were still much more shirts and socks to be stowed away than would fit into my regular suitcase.

Being the kind of nerd that I am there also needed to be room for several pairs of dance shoes and of course some network equipment… (One can never have enough ethernet cables, but I’ll get to that later on.)

Eventually most of it found a place somehow and I was ready to leave, leaving behind only a few more shoes to be brought over by my lovely partner only a week later… 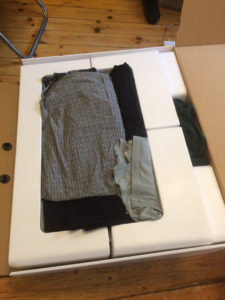 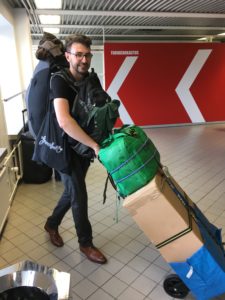 Me on the move

The small luxury of an outside cabin

On the ferry I enjoyed the small luxury of an outside cabin all to myself, but refrained from indulging in the questionable entertainment programme. Now these ferry trips are somewhat well known but not necessarily in a good way and having been on ferries between Turku and Stockholm before, and thus knowing the “experience”, I certainly didn’t need another helping of drunk people “dancing” to Finnish covers of some more, some less outdated pop/rock songs. Due to heavily taxed and therefore expensive alcohol in both Finland and Sweden these ferries enjoy a high popularity as thanks to a stop in Mariehamn, the capital of the Åland Islands, alcohol can be sold tax free and significantly cheaper in the on board shop. These trips aren’t called “Booze Cruises” for no reason.
Luckily it wasn’t too bad on my particular trip–maybe because I as traveling from Sunday to Monday and maybe the route between Stockholm and Turku is a bit more popular if you’re mostly in it for cheap drinks.

Anyway, I’m getting sidetracked here. I eventually arrived in Stockholm to a sunny morning and have since enjoyed five very intense but interesting weeks of Swedish student life of which I will report more in the following posts.
Then I will also explain why one can never have enough ethernet cables 😉